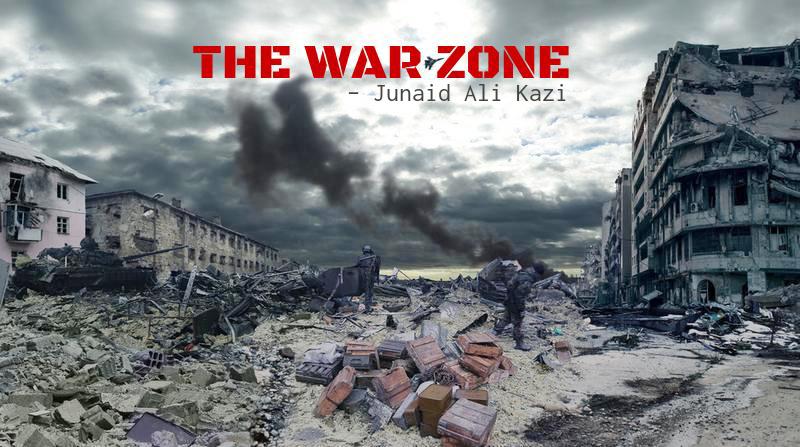 It was cold and dark. The unit moved in pain after being hit by shrapnel from explosives they just planted. They moved ahead following the order into the ruins of the dilapidated street.

‘How could that be? We just leveled this entire town. Unlikely!’ said Ajar.

‘What if there is someone inside? Can we have a look?’ Mujeeb retaliated.

The commander looked back and walked towards the unit. He held Mujeeb by his neck and pushed him hard.

‘We are not a bunch of compassionate fools, you understand? Anyone who feels so can come forward. We have orders. We kill each one of them and move towards the city before the day breaks. Now remember, anyone who shows sympathy or sacrifices our agenda in favor of the human inside you can talk to me. I will happily put this pistol down your throats and blow your necks off’

There was darkness everywhere. No trace of humans; just fire and smoke. If there was a rift between survival and death; the latter would submerge in cold waters howling for mercy. This morning they were sitting in their safe havens when the commander received the next order.

Legend had it that the commander was once deployed in a war zone for months. When he returned, his bag contained rotten flesh filled with maggots. He smiled at others saying ‘Nothing like eating your own people’

Mujeeb was uncontended with the fact revealed and decided to part ways. He quietly walked away from the unit and stormed inside the burning chambers of the building. Surprisingly, no one else heard the baby cry but Mujeeb and the human inside him were both convinced beyond hesitation.

He began his search. The cries however amplified with every step he took but he still had no sight of the child. He sat and looked up. There was a large hole in the roof the building.

“You know how do you fire this baby Ajar? Just tilt a bit and fire. As long as you maintain the angle, your shoulders won’t break. But it is certainly going to break those motherfuckers’ Mujeeb chuckled and fired the missile towards the town.

The other side of war seemed horrible, painful; excruciating.

Mujeeb searched for hours and finally found a little child hiding below rubble.

‘What do you want?’ asked the child.

‘I am here to save you kid’ said Mujeeb.

‘From who?’ the child retaliated.

‘From those guys who killed your family’

‘Aren’t you one of them?’ the child asked.

‘I was, but now I am not. I was lost. I had no hope. I was shown the path of Allah. I was taught Jihad. And I was trained to sacrifice myself in the name of Islam. I was wrong. I was foolish. I now realize the damage that I have done. This missile was fired by me. I killed your family. I killed everyone in this town. Tomorrow my unit will head towards the city and hit the capital in a few days.’

‘I know Mujeeb’ the child whispered.

Silence prevailed as the house slowly burnt to ashes.

‘How do you know my name?’ Mujeeb asked.

“I have always known you. I know your father, your mother and each person you met and ever knew. But you chose to ignore me”

Mujeeb was taken aback and his hands began to shudder.

The child moved close to him ‘Now listen to me carefully. You still have enough ammunition to kill Ajar and everyone out there. Walk towards the roof on the opposite side of the building and you will find some shelter. They are searching for you anyway. Kill the commander first. And launch a couple of grenades at the unit. By the time they find you, you would have killed almost all of them. Shoot the injured in head. Make sure that no one is alive. Go to the commander and get that note out of his pocket’

Mujeeb always thought of himself as a decorated renegade. But this child was about to change his opinion.

‘Do as I say Mujeeb. I will be waiting for you here’ said the child.

Mujeeb quickly hurried towards the roof. He found the unit scouting the perimeter. The commander yelled, “Find that bastard and let me do the honors. I shall slice his head and pull out his intestines”

“Do it now’ yelled the child.

Mujeeb fired all the bullets in his gun. He pounded the unit with three grenades and killed all of them. Within minutes, the unit reduced to nothing but debris of flesh and blood. Ajar limped slowly and looked at Mujeeb.

‘What have you done Mujeeb?’ he yelled in pain.

Few minutes later, Mujeeb went down and pulled out the note as instructed by the child.

He hurried back to the building. There was no one. He began searching for the child.

“Read what it says. I am around”

‘What is this?’ Mujeeb asked with a chaotic mind playing a million games in his head. ‘What are you?’

“I am a child; a father; a teacher and more importantly, a mercenary who was sent to kill you and your unit.’

Mujeeb’s feet trembled hard. He was talking to a child who just disappeared but still sounded unfamiliar.

“You see, I killed aristocrats, God men, good people, people of all faith but this task was a bit difficult. I just did not want to dirty my hands killing you all. You are filthy. You are corrupt. The note that you just read was sent by the leaders you chose. Leaders who made you despise everything. The corrupt devils who took charge of a world order and began to change things for their welfares. This is not war. Wars are fought against men. Against nations. Not against pricks like you. You were sent by them. I was sent by Him.”

‘Who are you’ Mujeeb asked.

“Remember what you told Ajar after firing that missile?”

Mujeeb thought for a while. Held his gun close to his neck and uttered:

‘I said ‘Death comes in any form my friend’

“Please do the honors Mujeeb”

There was an error retrieving images from Instagram. An attempt will be remade in a few minutes.